Once the decision has been made to start working with 360° video, the first step is to choose a 360° video camera. This is not an obvious step as new devices with different characteristics are constantly coming onto the market. In this section, we present several features that are important when choosing a 360° video camera.

There is often confusion surrounding the meaning of resolution, such as that the resolution is the only thing that will determine the quality of your footage, but this is not entirely true. The resolution of the 360° camera is related to, and provides information about, the number of pixels the image contains. In the case of 360° cameras, this can be described more concretely as light sensors that capture light. Thus, there is ultimately one light sensor per pixel in your final image.

The metaphor of an old television or old monitor is an example that may help to understand this better, as in the past it was possible to actually see and even count the pixels on a monitor.

In practice, resolutions are often expressed with an shortened name or label, simply because it is not convenient to keep talking about 1280 x 720 or 3840 x 2160. Therefore, we use the labels below, where you can also see that for resolutions larger than Full HD, reference is usually made to the resolution of the width:

The use of an external memory card, which is most common, offers the possibility to choose the amount of memory capacity yourself. Even when the maximum memory capacity is reached, one can simply replace it with another memory card. This allows the recording of the footage to continue, without the obligation to continuously free up memory capacity.

When purchasing a memory card, there are a number of things to take into account. First of all, check which type of memory card is suitable for your 360° video camera. In most cases, this will be the common micro SD. Then also look at the number of memory cards required for the 360° video camera, as this can vary from device to device. For example, the Samsung Gear360 camera only needs one memory card, while the Kandao Obsidian Go needs a separate memory card for each lens. Since this camera has six lenses, it requires six memory cards, as shown in the image below. 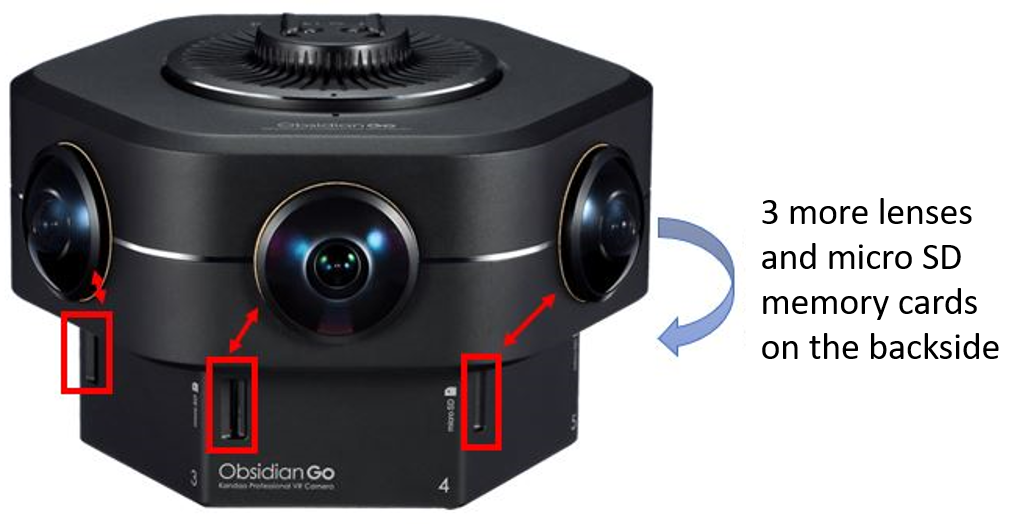 Then one can look at the writing and reading speed of the memory card. The writing speed refers to the speed at which the footage is transferred to the memory card. The reading speed provides information about the speed at which the material is viewed on the camera itself or how fast the camera can transfer the material to, for example, a computer. However, there is no unambiguous answer to the question of which speeds are the best. The required speed depends on several factors, such as the number of pixels, the type of footage, etc.

The most important aspect with a memory card, remains the memory capacity. A memory card with a slower write and read speed can still store the images and transfer them to, for example, a computer. Depending on the speed, this will only be faster or slower.

A battery is used to power the 360° video camera. Depending on the camera one buys, there will be a fixed built-in battery or replaceable battery. Which variant to choose depends mainly on the purpose of use. Choosing a camera with a replaceable battery, offers the possibility to provide yourself with extra batteries. When the battery is not charged or when it is empty after filming footage, it is possible to replace it with a spare battery.

Also keep in mind that battery life differs, just like with all traditional digital cameras. Therefore, it is advisable to always look at the suggested battery life, which is usually placed among the specifications of the 360° video camera. Here, information will be offered about the time the camera can record, with a fully charged battery. The example below corresponds to the ‘INSTA360 ONE X’ (https://www.insta360.com/product/insta360-onex).

For example, a certain camera may have a maximum recording time of, for example, 25 minutes. When one wants to shoot 30 minutes, the camera will stop filming after the first 25 minutes. The camera must then be restarted to film the remaining 5 minutes.

When talking about the dynamic range of a camera, this refers to the nuances between the dark and light parts of the image. The function of this dynamic range, is to ensure that nuances between these darkest and lightest parts become visible. Think for example of a landscape that is completely white because of the snow. If there is a black rabbit somewhere in the landscape, then one wants to be able to capture this as well. It is therefore that the dynamic range plays a role. If this is not high enough, perhaps a black spot will be visible, but it is not possible to determine whether this is a dog or a rabbit. When the dynamic range is sufficiently high and the camera is able to put clear nuances between the white and black, it will become clear that it is a rabbit and not a dog.

The best way to get an idea about the dynamic range of a camera, before buying it, is to watch online sample videos of the relevant 360° video camera. 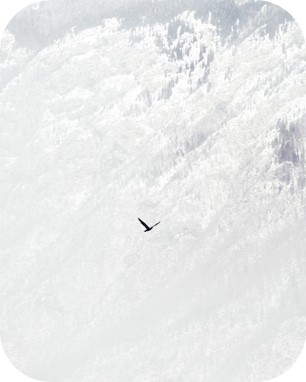 It is important that the camera is easy to use. That’s why a number of aspects are listed here, which can come in handy: